The Last Night of Crypto 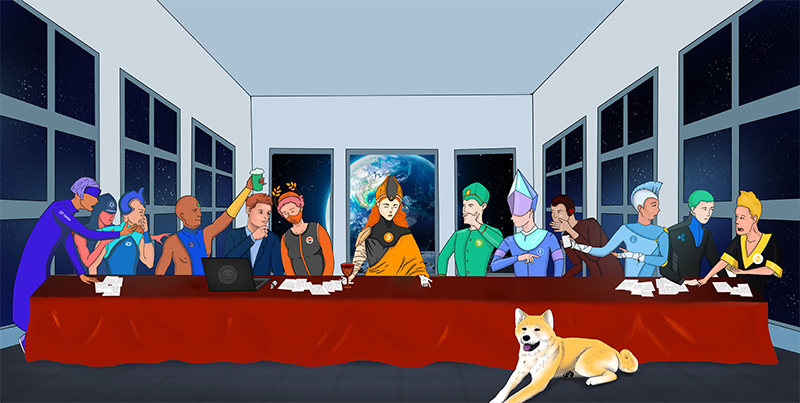 The Last Night of Crypto is a work of art painted by an anonymous artist. Nyla Hatem lives in a European country; however, her exact place of residence is not known. What is known is that she is a Middle Eastern refugee that works anonymously. She says that she is going to prepare more NFT paintings.

This mysterious work of art has small defects and suspicious details. You might think that it is possible to understand its purpose by reading the artist’s comments. However, her comments are more ambiguous than the artwork, something which makes it mysterious!

“What are the characters thinking about? What are they talking about? Stress, thinking, surprise, foresight, inner peace, betrayal, and even defects are the inseparable features of this work. Mysteries talk.”

The Planet Earth is obvious in the background. At the first glance, you might think that this meeting was held on another planet; however, by looking at windows on the left and the right, you will realize that the meeting is probably on a space station. Perhaps, it might indicate something else!

We even asked Nyla Hatem about the man in the suit whether he was Elon Musk. She refused to answer. However, some resemblances can be observed between this man and Elon Musk.

The characters were designed interestingly, and each of them has specific appearances. One of them is worried. The second one is surprised, and the third one appears to have a question. Perhaps, one of them is happy for no reason. In the center, Bitcoin is peacefully thinking or meditating in short distances from others. Apparently, Bitcoin has something invisible in his left hand (that is not visible to us). The combination all these features makes this work beautiful.

Finally, there is a dog that might symbolize Dogecoin.

This Art is accessible On OpenSea Market, Click to See it